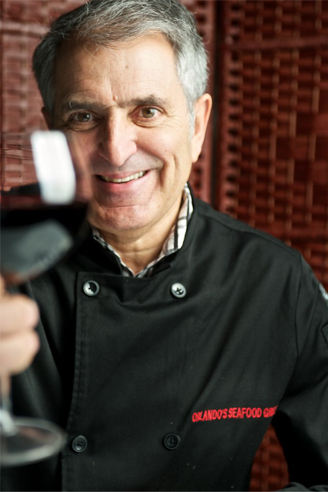 Arnaldo Carreira takes risks, bucks trends and is a pioneer in Winnipeg’s dynamic restaurant scene.
Seventeen years ago, the Chef/owner boldly opened Orlando’s Seafood Grill, a fresh-seafood restaurant smack dab in the middle of the prairies.
The Portugal native was also the first restaurateur to introduce European specialties like barbequed octopus, orange roughy and fresh scallop on the shell to the city.
“I’ve opened the gates for other restaurants to bring in the food we’ve been serving for all these years,” says Carreira.
Today, he still serves exotic fare—fresh seafood and fish shipped in from around the world—in the midst of a strong eat local movement.
Meanwhile, he prepares the food inside the Corydon Avenue restaurant with one-of-a-kind Portuguese flair in Winnipeg.
The inherent oceanic taste of each dish is drawn out by Carreira’s magic touch and quest for perfection. Take the featured lobster bisque for example, a silky, luxurious soup that transports diners to the seaside.
“It took 16 years to get it where it is today…at it’s best,” says Carreira, who doesn’t add even a single pinch of salt to the soup.
His earliest lessons in the kitchen were by his mother’s side in Grandola, Portugal, around 100 km south of Lisbon.
From her, he learned to always use high-quality, yet basic ingredients. To this day, he sticks to simple staples of Portuguese cooking: bay leaves, garlic cloves, cilantro and olive oil. He also lets the rich flavours of the fish and seafood speak for themselves.
“I cook with common sense,” he says. “I cook nothing by the book.”
Fall-off-the-bone lamb chops, steak and other meats are also on the menu, including Portuguese-style roasted chicken charged with spicy peri-peri sauce. But the big star is fish, including tuna cheeks, fresh cod, red snapper and many other species all offered as available. These well-prepared, unique dishes have firmly established Orlando’s as a niche eatery.
While he is passionate about the food, he is just as passionate about the people who eat at the Corydon Avenue landmark.
On a regular night, diners are just as likely to find Carreira topping up wine glasses on the patio as they are to find him firing up the kitchen grill.
The subterranean 36-seat restaurant (80 seats when the patio is open) is the perfect size for getting up close and personal with the customers.
“I’ve always done the dining room and I love cooking too,” says Carreira of his duo  loves.
Carreira also gives back to the community. Every January since 1984, no matter what the temperature, he hosts the Polar Bear Lunch. This outdoor feast on the patio has raised approximately $65,000 for various city charities since its inception.
His culinary journey to Winnipeg started after a fateful holiday. In 1968, an 18-year-old Carreira, his parents and  brothers, Louis and Joseph, travelled to the city as tourists. They saw potential, decided to stay and became landed immigrants in 1974. After bussing and cooking in local restaurants, Carreira, his brothers and business partner Manuel launched Portuguese eateries Nazare in 1976 and Picasso’s in 1983. Their influential hand in Winnipeg’s dining scene didn’t just stick to their Portuguese roots.
The four ran Bogart’s from 1979 to 1985, a hopping discotechque and dining room that attracted the likes of the Harlem Globetrotters, Miss Universe and Wayne Gretzky in its day.
When disco died, Louis visited Brazil and then returned to Winnipeg inspired by his exotic culinary experience. Carreira and partners took a risk again and opened Bloomingdale’s in 1986, a huge 29,000 sq. ft. churrasqueira. The Brazilian steakhouse, serving a wide variety of grilled meats, was the first of its kind in Winnipeg.
“[That] was ahead of its time,” Carreira says.
Today, the brothers are still in the restaurant biz, but Carreira remains the sole ’Pegger.
When asked what it was like working with his brothers for so long, the lively chef thoughtfully pauses and  then chuckles. “It was fun. We were young. Not everyone agreed with the same ideas, but we managed to get along,” he explains.
It’s clear that entrepreneurial spirit runs in Carreira’s immediate family too. They pour their hearts and souls into Orlando’s—his wife Catherine helps in the dining room managing the front of house; his son, Orlando is a waiter.
Throughout his career, the sociable chef has also formed strong bonds with many customers.
Two customers have been Carreira’s fans for 35 years.
It’s that customer appreciation and fierce loyalty that inspires Carreira to continue pushing boundaries, taking risks and doing the unexpected.
“It means I must be doing something right.”