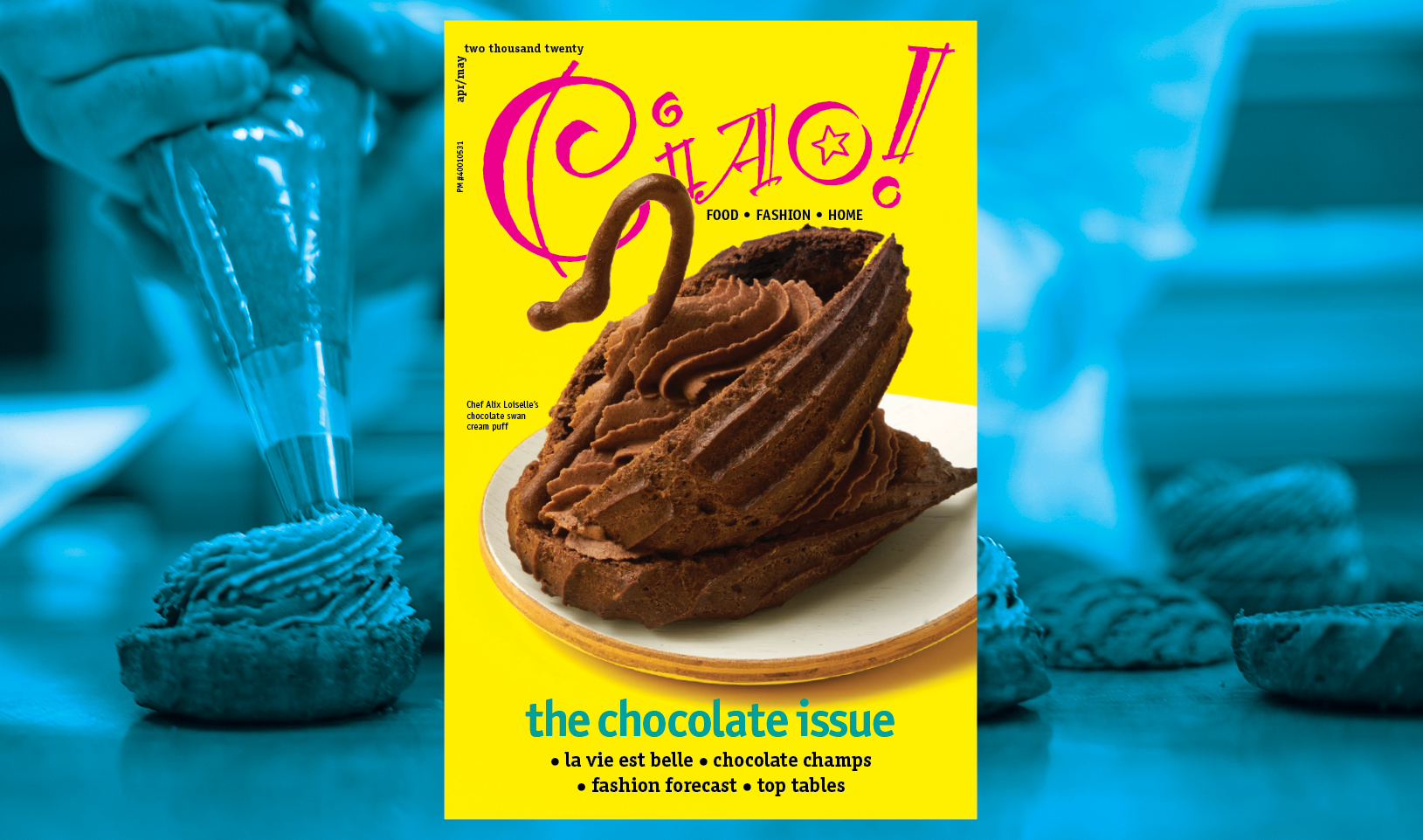 Even before first taste, it is clear that husband-and-wife-duo Joseph Chaeban and Zainab Ali are passionate about ice cream. Behind the doors of 390 Osborne Street, Chaeban Ice Cream offers a level of luxe unexpected for an ice cream shop. A white sunlit space welcomes guests, and flights served on wooden boards offer an assortment of creamy scoops. This obsession with every small detail is what sets these artisanal pints steps above other brands.

It starts with milk. Joseph drew on his career as a cheesemaker to become the first single-origin ice cream maker in Canada. Similar to how terroir influences wine, dairy experience taught him that sourcing directly from one high-quality Manitoba producer would ensure the rich texture and pure flavour he wanted for his ice cream. “Dairy farmers are the hardest working people I’ve seen in my life,” says Joseph. “We want to put a face to the farmer.” He reached out to the Dairy Farmers of Manitoba to find a farm he could work with, and built a kitchen meeting all agricultural requirements. Within a month, Stonewall’s Grenkow Holstein Farms was delivering raw milk to pasteurize in-house.

This commitment carries on into the mix of ingredients that flavour the ice creams. Today, Saskatoon berries from Purple Berry Orchard, located just outside the city, appear in pints of “Louis Lavender”, and Bee Project Honey, a local urban apiary, sweetens “Plain Jane” vanilla and “Reece Piece” peanut butter.

Joseph and Zainab work tirelessly to source the best ingredients, so maintaining authentic flavour is crucial. It’s difficult to find a pint of ice cream in a supermarket that doesn’t list additives like di-glycerides or xanthan gum. Joseph drew further on his dairy science background to eliminate artificial stabilizers and emulsifiers. Instead, ricotta and cottage cheese, packed with protein and richness, preserve and bolster the flavours that are meticulously infused into every batch, and keep Chaeban Ice Cream completely natural.

While ice cream can technically be whipped up in minutes, Joseph and Zainab believe in a more refined approach. They adhere to an extensive three-day process, preparing and steeping fresh ingredients into a milk mixture overnight before churning and packaging flavours like “Mojito Mint Patti” and “Abir Al Sham”, a Syrian-inspired delight that uses rose and orange blossom water. Limiting the amount of air introduced during churning produces a denser, richer dessert. This decreases how many jars are made per batch, but is an important step to creating a supremely creamy mouthfeel.

The high-quality product has quickly made waves for the young company, which was launched in 2017, two years after the couple moved to Winnipeg. They fell in love with South Osborne when community members helped bring Zainab’s family to Canada during the ongoing Syrian refugee crisis, and were so moved by people’s generosity they decided to use Joseph’s dairy know-how to open an ice cream shop and become a permanent part of the neighbourhood.

In 2018, Chaeban’s “Louis Lavender” pints won the Great Manitoba Food Fight. This annual competition, organized by the Province of Manitoba and supported by Food and Beverage Manitoba, awards entrepreneurs with new and innovative products, providing cash prizes to help with further development and opening doors for retail expansion.

For several decades, freezer space has been dominated by Nestle and Chapman’s. However, consumers are revealing a desire for alternatives that are as wholesome as they are delicious, and this is where Chaeban is delivering big. “Our hopes and plans are to be a nationwide company, and that’s what we’re working on right now,” Joseph smiles at his wife.

Demand has rapidly grown for their jars. They have begun to distribute throughout Winnipeg, and their specialized pints can now be found at close to twenty retail locations, including Co-Op, Sobeys and Chaeban’s own South Osborne location.