Goat Milk? The grass that led to grazing

The goats at Oak Island Acres Dairy near Minto don’t know they’re in a special herd. Just give them a comfortable, familiar setting day-to-day, and they’ll be content to keep producing milk for us, as goats have done for thousands of years.

“They’re friendly animals and that makes them very pleasant to work with,” says Diane Rourke, who runs the dairy with her husband David. But these amicable animals prefer strict routine over novelty and require careful treatment. “One time I wore a red jacket to go milking, and the goats noticed right away that it wasn’t my regular jacket,” says Diane, remembering the goats’ nervous reaction that made for a longer than usual milking session. “They’re very perceptive to changes and they’ll notice a difference right away.” 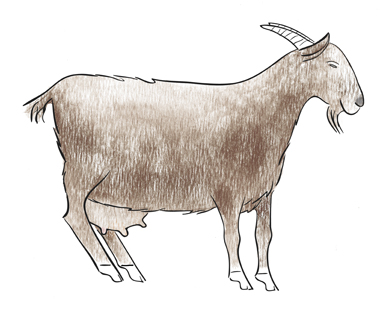 Kept calm and happy, though, these goats will have longer productive life spans than cows—as much as six years longer—and they’re slightly more efficient, producing more milk than cows per volume of food consumed.

Goat’s milk tastes similar to cow’s milk, some say sweeter, and has a similar nutrient profile. It contains 13 per cent less lactose than cow’s milk, with smaller fat molecules, which makes it easier to digest. Not many people know that, according to Manitoba Goat Association president Bill Paulishyn. “In many cases, people with cow’s milk allergies have no trouble consuming goat milk products,” he says, adding that these benefits carry over to cheese.

Diane says about a quarter of their milk goes to the Notre Dame Creamery for  bottling, and the rest goes to cheese production. Through production facilities at the U of M food science department, Oak Island makes a smooth-melting white cheddar, as well as a goat milk feta. This fall, they’re set to begin production of a soft goat cheese, with the texture of firm cream cheese and a notably tangy taste.

Oak Island also supplies milk to Winnipeg’s newest cheese maker, Whiteshell Dairy Foods. Whiteshell is taking initial goat’s milk orders for a soft cheese blended with cow’s milk, but  company president Pedro Campayo aims to produce various goat milk-only cheeses by next year, and says he hopes to use at least as much goat milk as the Rourkes can supply annually—400,000 litres.

Until Whiteshell launches all those varieties of goat cheese, including the piquant and nutty Manchego, the Rourkes are meeting the current demand through improved herd genetics and adjustments to their goat keeping skills.

They are, after all, new to goat farming. They bought the dairy in 2010, after choosing alfalfa to rotate within their 5,500 acres of grain. Inspired with resourceful zeal, and wondering what to do with a few annual harvests of alfalfa (which happens to be good ruminant food), the Rourkes decided to buy a goat dairy that was for sale in Île-des-Chênes.

The dairy they own has a 20-year history and enjoys wide retail coverage as the province’s only commercial goat dairy, with its milk and cheese on shelves of dozens of local specialty shops, as well as on major supermarket shelves across Western Canada.

“It certainly would be simpler to sell the alfalfa as hay, to get what you can and be done with it,” says Diane. “But we’re entrepreneurial. We wanted to add value to it.”

Versatile and efficient, the Oak Island goats are helping bring us tastes that are common elsewhere, spurred to a large extent by immigration-driven demand.

“Many people in the world use goat’s milk more than cow’s milk,” says Paulishyn. “And in Manitoba we’re seeing a lot of people coming from countries where goat’s milk and other goat products are much more common.”

Goat demand may be small, yet it already outstrips local supply as it continues to grow. Capitalizing on this, Diane and David Rourke aren’t stopping at dairy farming. They’re becoming goat ranchers, too. using the same acumen that helped them turn alfalfa into a dairy.

Previously, male kids born to Oak Island milkers have been sold. This fall, the Rourkes started keeping the males, adding them to a newer herd of goats recently aquired for meat production.