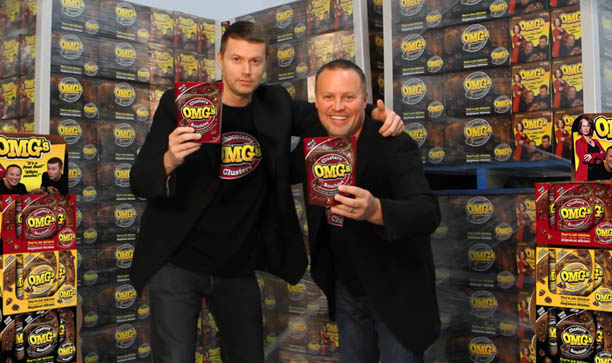 Finnson and Emery gained notoriety when their first brand Clodhoppers, a bite-sized confection, sold millions throughout North America. They sold that company in 2006. In the following years, chocolate candies in resealable packages, like AERO Bubbles, Big Turk Bites and Kit Kat minis, flourished, making it irresistible for the duo to stay out of the game. Thus, OMG’s Clusters, graham wafer chunks mixed with almonds and toffee covered in chocolate, were born.

In 2012, the duo partnered with Arlene Dickinson, marketing extraordinaire, on CBC’s Dragon’s Den. Dickinson supplied the financial boost the company needed, and OMGs took off. Two years later, production has increased to 2000 lbs of clusters an hour, and supplies grocery stores across Canada, and Sam’s Club, in the United States.
Focusing on a single product and developing a memorable brand are seminal strategies for the company. And although flavour variations are possible with OMG’s, they stick with three: milk, white and dark chocolate.

“When you heard the name of our old product, people didn’t understand what it meant. The brand was too vague,” explained Finnson. “Our new product is instantly recognizable and memorable.”

Finnson holds that Winnipeg is the perfect city for producing chocolate. Located at the centre of Canada, and with direct routes to the United States, distribution is easy. Overhead costs are also inexpensive compared to larger hubs, like Montreal, arguably Canada’s chocolate capital.

Other local chocolatiers share Finnson’s enthusiasm. Fred Morden, of Mordens’ Of Winnipeg, states that chocolate thrives in dry environments, where humidity doesn’t affect the cooking process. For this reason, Mordens’ of Winnipeg is positioned on the shady side of Sargent avenue, increasing resistance to unwanted heat and melting.

Although producers prosper in this corner of the world, some analysts predict that the cocoa business could be facing major changes. For the first time in history, the people of China are devouring chocolate. With a population of over one billion, the rise of chocolate consumption in this part of the world could, in the next 16 years, drive up prices or cause a worldwide shortage.

“The Chinese market hasn’t even been tapped yet,” said Morden. “If every person there consumed even one pound of chocolate per year, there would be a billion more pounds of chocolate needed.”

Manufacturers will likely respond by producing imitation chocolate, or watering down products with other ingredients. The European Union has already imposed chocolate legislation to ensure that imitation chocolate is not branded as the real thing. Canadian chocolatiers are calling for similar laws, citing that chocolate should have no more than four ingredients. Anything more should be considered confectionery.

Despite this, Finnson maintains businesses will still thrive. The key to avoiding negative fluctuations in the cocoa market is to invest in large volumes, so stock is available during periods of deficit. Many of us are happy to oblige.

“There’s no downside to this business,” added Morden. “Everyone that comes in has a smile, and when they leave they have a bigger smile.”