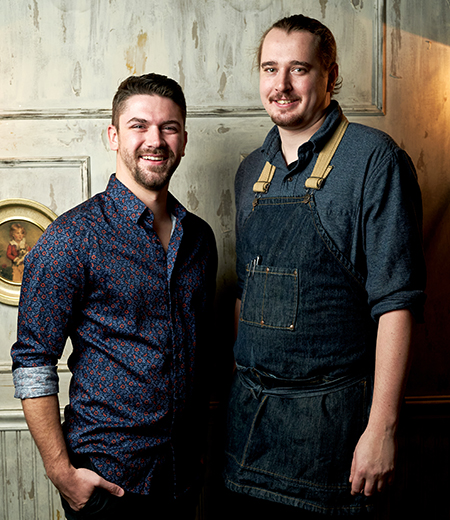 In the kitchen and behind the bar, Sous Sol brings playfulness to elevated dining.

By Ben Benton and Joelle Kidd

An antique clock beside the bar chimes the hour: 2 p.m. In the kitchen, pans clatter and cooler doors clunk, a clarion call that prep for the evening’s service is well under way.

A red wine reduction flows like silk from his spoon, waiting to marry a selection of local root vegetables to melt in your mouth braised beef short rib. Add to it a trio of sauteed mushrooms (cremini, shitake and oyster) it’s an umami burst that’s autumn on a plate.

“I’ve always liked the long-process things,” says Kolbe. “Stuff that takes a lot of care or time which at the end of the day you can’t replicate easily. That’s what keeps me interested.”

He traces this fascination back to one dish: “My Oma’s rouladen. It’s just this rolled out strip of beef.” Here he mimics rolling out the beef on the table. “A smear of mustard, a pickle, onion and bacon, you braise it and it just falls apart. It always makes me so happy thinking about that.”

This kind of nostalgia-meets-technical precision is the very core of what has made Sous Sol such a sensation for Winnipeg diners, ever since the neo-speakeasy opened five years ago.

The shared vision of owner Michael Schafer (Rudy’s Eat and Drink and Sydney’s at the Forks), chef Mike Robins (Sydney’s) and award-winning mixologist Erik Thordarson, the restaurant paired a decidedly traditional French menu and wine list with a fun concept that flirted with gimmickry: the eatery is (literally) underground, hidden beneath a plain exterior and a sign for “Vandelay Industries.” There is no phone number and little marketing. Inside, the dimly lit but welcoming ambiance flirts with styles of yesteryear. Wax drips from candelabra to coat antique kitchen utensils and curiosities. Walls are adorned with recipes from magazines and books of a bygone era.

It was an immediate hit with Winnipeg diners, but its popularity has stayed strong. And why shouldn’t it? In a year when the restaurant industry has had to fight to stay on its feet, when diners have periodically been marooned at home, dreaming of pulling up a chair in their favourite local establishment, the appeal of eating out has never been more clear. Sous Sol is the type of place that represents the pinnacle of what is so enticing about dining: the atmosphere, the possibility of surprise, the warmth of hospitality.

Sous Sol has been a product of team effort since the beginning. Along with Schafer and Thordarson, Robins brought his talents to bear in shaping the menu concept. In those early days, Kolbe acted as Robins’s apprentice. A quick study, chef Kurt was not formally trained but cut his teeth in a series of kitchens—from his hometown of Gimli to two and a half years under chef Tristan Foucault of Peasant Cookery, where he came to appreciate the French technique and nose-to-tail conceit for which Foucault is known.

Kolbe took a break from the restaurant for a lodge job in northern B.C. and stints under chef Ed Lam at Yujiro and Gaijin Izakaya. But he returned to Sous Sol this year—back to his butter-and-braising French roots.

While the menu is shot through with old-school French classics and crafted with impeccable technique, Sous Sol holds little by way of pretension. A spirit of playfulness pervades with menu items like “Fancy fries” (“Costco fries, truffle oil, parm”), and even the most highfalutin’ proteins are served on mismatched china.

It’s not just the food that’s resonating with loyal locals and out-of-towners alike. Behind the bar, Scott Redfern—the charismatic 27-year-old cocktail master who’s been working the Winnipeg restaurant scene since he was 16—upholds the restaurant’s reputation for inventive craft cocktails spiked with specialty syrups, far-flung liqueurs, and house-brewed ginger ale.

The inventive bar and elegant kitchen work closely together for maximum mad science. For the holidays, Redfern is working on a rum punch using sorrel, the Jamaican term for Hibiscus flower. Mixed with ginger, orange, cinnamon and water it’s Jamaica’s (often spiked) answer to iced tea. Redfern has seasoned his with pink peppercorns, cinnamon and cloves. For a recent chef’s special, Kolbe turned some of the punch into a gelée, to top roasted bone marrow.

As of press time in November, the city was just entering a lockdown, and restaurants paring their menus back to serve take-out only. Despite these travails, the kitchen was ready to keep doing it’s thing; Kolbe’s tender confit and truffle oil daubed dauphinoise ready to be whisked across the city in take away containers, even those famous cocktails available by way of a just-add-gin tonic kit. Diners can scrape together a little ambiance with an order of a taper candle and holder, and a free bluetooth speaker loaded with a Sous Sol playlist.

The same spirit of creativity and whimsy is the very reason this restaurant is so beloved. Stepping through Sous Sol’s secret entrance, you never know quite what you’re going to get—but you know it will be magical.