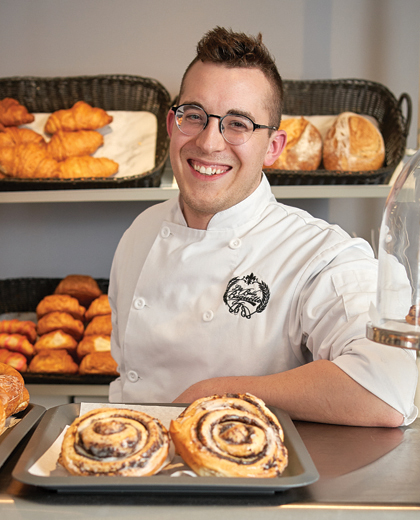 It’s mid-afternoon at La Belle Baguette, and the door settles into a gentle rhythm as customers hurry in hoping to snag the last almond croissant before it’s too late (it’s too late). As I munch on the much-coveted pastry, chef owner Alix Loiselle buzzes out of the kitchen, bringing with him the heavenly waft of warm cocoa and buttery baked delicacies.

Loiselle’s charming bakery delivers all the dexterity and grandeur of French baking—sans the pretentiousness. Pastries and breads are a mix of traditional Franco-Manitoban recipes from his grandmother and classical French technique. Brand identity is key, and La Belle Baguette’s is strong, drawing on elements from Loiselle’s life, like the cute uniforms inspired by his time at a Montreal bakery and signature pink boxes to bring home perfectly round ganache tartes. The bustling  St. Boniface neighbourhood is a breeding ground for regulars, with constant foot traffic from nearby hospital and schools. Serendipitously, it is  situated on the same street Loiselle grew up on, and he always keeps the needs of the community in mind, quickly evolving his business to include lunch items after a customer asked for a sandwich. There was mustard and brie cheese in the fridge, pears leftover from a batch of danishes, and plenty of bread of course, so why not?

“If I was a bakery, this is who I am,” Loiselle claims. As he gracefully pipes lush cream atop choux and ponders personalities of  pretzels like clouds in the sky, it’s clear: he really loves what he does.

The bakery opened in July 2015, a soft opening that was not very soft. “It’s been a roller coaster ever since,” he chirps, admitting that he didn’t expect to sell out of everything so fast. He had to come up with something quickly so he twisted and baked pretzels to fill the empty trays. They were a huge hit and to this day, sweet and savoury pretzels are baked every morning.

Because of the ease with which the young chef carries out such business-defining moments, it’s easy to assume this was always what he was meant to do. Not so.

“I’m a music school dropout,” Loiselle quips (as if on cue, his high school band teacher pops in at this very moment, setting off a bout of laughs and “what are the chances of that?”). An accomplished pianist, he was accepted into the music program at Brandon University but developed tendonitis and was forced to take a year off to heal. Unable to sit still for even a second, he signed up for a pastry course at Louis Riel Arts and Technology to pass the time. It was there that he discovered a true passion for baking and had to decide: music or pastries? Local legend chef Helmut Mathae took Loiselle under his wing during the course, encouraging a career in the fine art of pastry. Then it was off to Ottawa to attend Le Cordon Bleu, a prestigious and highly competitive French culinary school. Thus commenced a whirlwind career for Loiselle.

Armed with premier French training, Loiselle packed up his car yet again, this time heading west to join the pastry team at Fairmont’s renowned Chateau Lac Louise. After a while, the seclusion of living and working in a castle shadowed by mountains had the restless chef’s toes twitching, and once again his little mile-collecting car made its way across the country, settling in Montreal. After contentedly working at boutique boulangeries, including the oldest pastry shop in the city, an opportunity of a lifetime presented itself: working under world famous chef Daniel Boulud at his new restaurant inside the grand Ritz Carlton.

He jokes that they rolled out the red carpet every night at the Ritz, routinely welcoming celebrities like Celine Dion and the Prince of Monaco. The restaurant featured an open kitchen, meaning hair had to be cut, uniforms immaculate, nails groomed, and a smile plastered on at all times. “It was intense,” he admits, but credits it as one of the best experiences of his career. But after a while, working in such an intense, fast-paced and performance-driven environment, takes a toll—both physically and mentally. Lucky for Winnipeg, the spirited chef moved back home to take a break from the whirlwind lifestyle and spend time with family.

After meeting his husband Peter and helping run his family’s café, the space that formerly housed Chez Sophie became available, and they jumped at the opportunity to turn it into a bakery.

Loiselle has quickly grown his petite boulangerie into a citywide empire, winning over Winnipeggers one croissant at a time, opening a second location in St. James, a larger space that handles commercial orders that get delivered across the city. Fans of Hallmark movies might even recognize it as the backdrop to a recent Valentine’s Day special, “The Secret Ingredient”. Even those who aren’t familiar with the name La Belle Baguette (doubtful) have probably bit into one of the supersized candy-glazed croissants at one of the many specialty stores, coffee shops and other purveyors throughout the city who stock his creations.

To keep up with the flux, Loiselle starts   his day by 2 am, baking until it’s time to drive his own delivery truck to finish morning drop offs. It keeps relationships strong and personal. When does the chef eat and sleep? “There’s no time for that!” he laughs, insisting that the long hours don’t affect his seemingly unlimited bank of energy.  Maybe that’s his  secret ingredient— butter, eggs, flour and a hint of  joie de vivre.