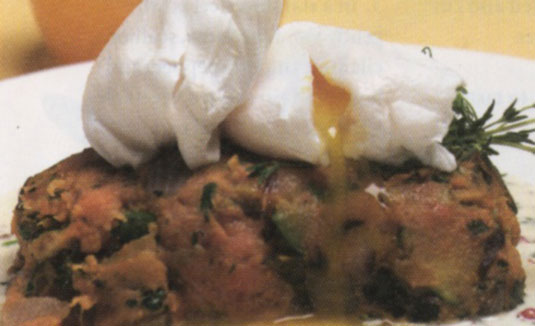 Made with the freshest produce that comes from fall’s harvest, this recipe is a revised version of an old favourite.

Method
Roasted vegetables
1.    Toss the asparagus, squash and red pepper in the olive oil.
2.    Season vegetables well with sea salt and pepper.
3.    Roast vegetables on baking sheet at 425˚F for 10-15 minutes. Set aside to add to hash.

Hash
1.    Cover yams with cold water and simmer until tender, about 25-30 minutes.
2.    Drain and rest until cool enough to handle. Peel and cut into 1/2-inch cubes.
3.    In a stainless steel bowl, gently combine yams, scallions, cilantro, chipotle peppers and honey. Stir in roasted vegetables. Season with salt and pepper to taste.
4.    Form hash mixture into four equal sized patties.
5.    In a saucepan, heat olive oil. Sear patties until each side is golden brown.

Poached eggs
1.    While hash is browning, bring 4 litres of water to a boil with vinegar and a pinch of sea salt.
2.    Gently place eggs in simmering water for 3-5 minutes.
3.    Remove with a slotted spoon and dry gently on a paper towel.

Creamed spinach
1.    Bring whipping cream and white wine to a boil. Reduce by a third.
2.    Add spinach. Cook until spinach wilts, about 30 seconds.
3.    Season with salt and pepper to taste.

To serve
Place hash in the centre of plate. Top with creamed spinach and poached eggs. Garnish with a sprig of cilantro.