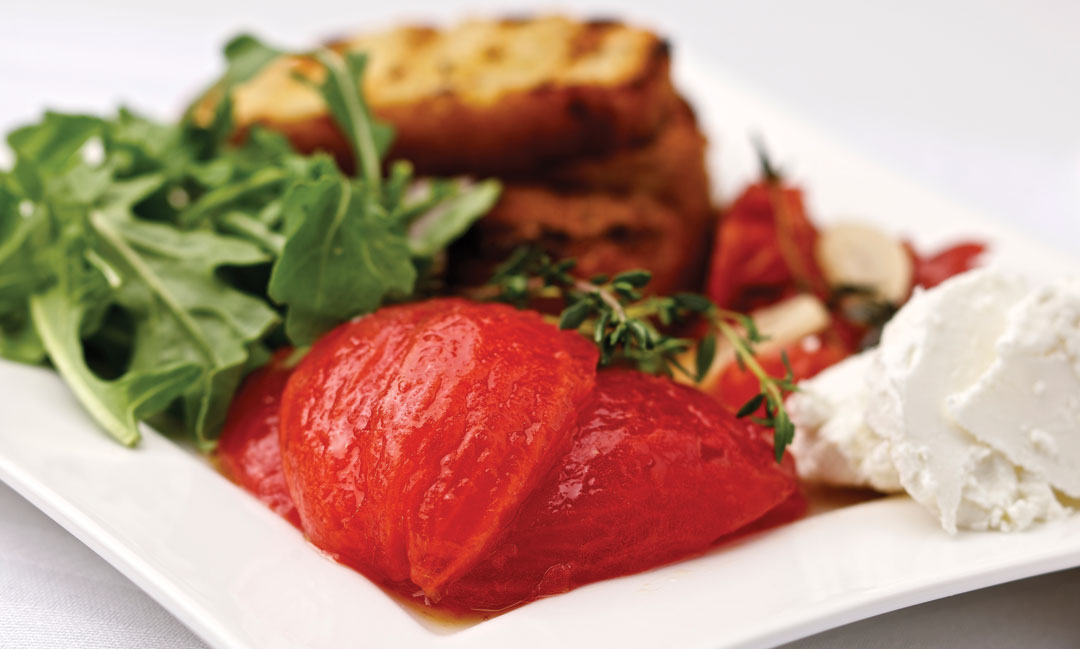 It’s 7 a.m. at Greenland Gardens, just southeast of Winnipeg. Inside the 25,000 sq. ft. greenhouse, heaters ward off the early morning chill. Eight workers push carts down the aisles, gently pulling tomatoes and cucumbers from the vines.

Meanwhile, owners Murray and Lisa Warkentin plan their day. Today’s schedule includes watering plants, bookkeeping  and deliveries to some of the 80-plus Winnipeg businesses they supply. Established in 1999, Greenland hydroponically grows English cucumbers and three kinds of tomatoes: cherry, beefsteak, and cocktail. Look for the Greenland Gardens sticker on this fresh produce, carried in local stores like De Luca’s Specialty Foods and Marketplace grocery store.

For Winnipeggers starving for fresh, locally grown vegetables outside of our short growing season, Greenland’s luscious, hearty tomatoes and bright cucumbers are a welcome relief. Across the city, chefs adore the produce for its robust flavour and nearly year round availability.

“It’s not your cardboard tomato from across the state line. It’s about as close to anything out of the garden as anything you’ll find,” says Murray Warkentin.

Before starting Greenland, Warkentin worked on a farm. The couple were also missionaries in Haiti for five years. While in Haiti, a friend told them about a successful Canadian greenhouse.

“We got inspired. We went home and we did it,” says Warkentin, whose mother also had a greenhouse for 25 years.

At the time, the local industry was in its infancy. Some had tried and failed. Others are still going strong, including four greenhouse producers currently at work in Manitoba.

Initially, the biggest challenges were growing tomatoes and marketing their produce, he says.

Today, Warkentin, not surprisingly, thinks his vegetables are the best of the bunch.

“It’s about flavour and quality,” he says.

Quantity and availability counts too.

Two years ago, Greenland doubled the size of their greenhouse to meet demand. Today they grow about nine months a year.

“Planting in the field, you get such a short window to sell. This gives us work year-round, basically,” he says.

“The nice thing about hydro-ponics is, it’s so clean and safe,” says Warkentin.

Inside the greenhouse, an automated natural gas system  heats and cools the air, mimicking the heat cycle of a typical day. On scorching hot days when the greenhouse can reach 38˚C, a misting system— called a swamp cooler—kicks in, giving plants extra water to compensate for the heat.

Twice a week, staff come in to pick tomatoes, while cucumbers can be harvested every day. By the following November, the season has wound down.

Greenland has experimented with growing a wider range of vegetables and may expand their produce line in the future.
For now, the focus is on delivering produce that lands on plates typically within one week of harvest. Greenland’s high quality product makes it a hot commodity in commercial kitchens.

Customers include 529 Wellington, The Current, fresh café, Amici, and University of Winnipeg’s Diversity Foods, to name a few.
U fo W Executive Chef Ben Kramer regularly uses Greenland’s  produce in his kitchen, including the marinated and confit tomato plate (pictured).