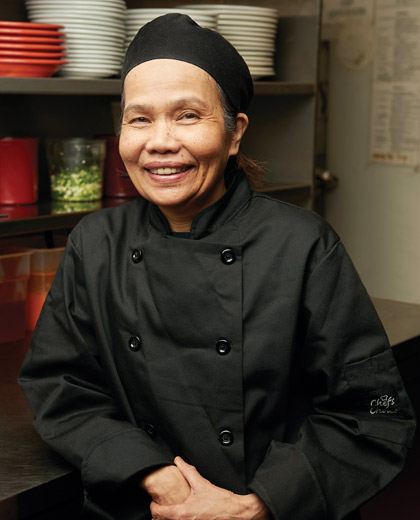 If there’s one thing we’ve learned from Chef Sumruoy Poomrat, it’s authentic Thai food can’t be rushed—it takes time. Her teacher, Rajawongse Thanadsri Sawasdiwat, a chef who cooked for the king of Thailand, taught her this valuable lesson and it has acted as a guiding principle for her, now on the other side of the Pacific. The more Poomrat talks, the more it’s clear she is proud of never taking shortcuts. She explains that the heat on the stove is most important, slowly simmering and stirring sauces—some for well over an hour—to get the proper consistency and balance of flavour. Beware the restaurants that dump cans of coconut milk into the pot directly with the curry paste, she warns, neglecting to first heat the paste until aromatic. Every dish she prepares is caringly cooked to taste, capturing the essence of Thai cuisine, and its infamous harmony of spicy, sweet, salty and sour.

Culinary stars like Poomrat can be found in all corners of the city, often slipping under the radar between the hype of new restaurants opening and social media supers. At her south suburban restaurant Siam Thai, she is a powerhouse in the kitchen, working her culinary prowess seven days a week. Despite its unassuming location, the restaurant has garnered quite a devoted following since opening 20 years ago, though some may not know the face behind the food.

Poomrat came to Canada in 1979, bringing with her a love for cooking and a top-notch culinary education to back it up, though, her son and co-owner Mick Kongmanisvong shares, “It took 21 years to convince her that maybe Canadians would love her food.” And love her food they do. Even high-profile celebrities like Renée Zellweger and Forest Whitaker have been spotted enjoying Siam Thai’s irresistible cuisine. It wasn’t without it’s challenges. Kongmanisvong says, in the early years, a lot of time was spent explaining the food and encouraging people to try unfamiliar flavours. Thanks to this mother and son duo, Winnipegger’s are much more familiar with Thai food now.

Quality ingredients, like certified Angus beef, are also paramount to each dish and the proper ingredients are never substituted for cheaper alternatives. For example, their curries never have vegetables like carrots or snow peas, but opt for traditionally prepared bowls filled with zucchini, bamboo shoots, red and green peppers as well as Thai eggplants. These small green nightshades are ubiquitous on the menu, noticeable for their earthy taste when cooked. It’s clear this chef won’t compromise on flavour, even if it means working twice as hard or spending twice as much.

Her unwavering patience and commitment to authenticity has been noticed on a national level too. In 2016, Siam Thai was unexpectedly paid a visit by representatives of the Vancouver Thai embassy and assessed for Thai Select certification, an award that recognizes restaurants for serving authentic and traditionally prepared dishes. The representatives flew in at the request of another restaurant but it did not pass the certification, so they scoped the city for other Thai restaurants, landing on Siam Thai. It’s one of only nine restaurants in Canada to receive this certification and Poomrat was flown to Vancouver to accept the award, an immensely proud moment for the chef.

When she first arrived in Canada, she never imagined people would actually pay money for her food. Though her culinary training in Thailand was first rate, the chef decided to enroll in technical college to study culinary arts and learn more about this nation’s food culture. Things like appetizers were a foreign concept for her, as back home, all dishes are served at once. She also learned the French technique to skim fat off the top of soup broths, a practice she’s adopted in her kitchen. Blending exotic and familiar gives an approachability to Siam Thai’s food that customers respond to.

Finding qualified kitchen staff is an ongoing struggle for Poomrat, as there are so many intricacies to Thai cooking and it’s difficult to teach. This means the chef is on her feet in the kitchen cooking every single day, often there before sunrise prepping curries and sauces. That is, if her son wasn’t there until early hours of the morning doing it himself to give his mom a break. During the busiest time on weekends, the kitchen pumps out four giant tubs each (seriously, they’re huge) of their most popular curries like massaman and green curry. But the hard work is worth it. The mother and son dream team smile as they talk about the families that have been dining with them since day one. The kids are all grown up now with young families of their own, and continue to come to Siam Thai, sharing a legacy and taste of tradition.